Deal 8 cards to each player.

Place remainder of the cards in the middle of the playing field turning the top card over and placing next to stack of cards.

Beginning with the player to the dealers left each player either plays a card matching the number or suite  of the top card on the discard pile or draws a card from the pile.

The first player who gets rid of all their cards wins, and the other players score penalty points according to the cards they have left in their hands – 50 for an eight, 10 for a jack, queen, and king, number cards are worth their face value.

Play it with our Child Safety Deck 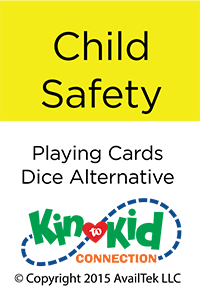